< Return to site
Purpose-Driven Advertising
Discover the industry leaders linking brand purpose to profit
April 30, 2018
Purpose-driven Advertising is a subject that's very much "en vogue". We should know - we're trying to build a business off the back of it! Consumers today expect more from their brands - better quality products, faster customer service responses, and for companies to behave with a sense of social responsibility.

That's not actually a huge amount to ask - it's just never been asked before.

These expectations and questions run deeper than an annual CSR-related park tidy, or the CEO's kids football team getting a new kit and a ball. Consumers increasingly want to know the very identity, the raison d'être, of why a brand exists.

“The purpose of life is not to be happy. It is to be useful, to be honorable, to be compassionate, to have it make some difference that you have lived and lived well."
- Ralph Waldo Emerson

Perhaps not the cheeriest reflection on life as we know it from the bold Ralph. But a fair assessment of how consumers, rightly, expect their brands to behave.

In many regards, these are ideas and brand identities that advertising has always tried, and successfully managed, to convey.

But with the data, news and opinion that's forever available across the modern world, the margin for error has never been smaller. If a brand is caught behaving unethically, or engaging in any form of questionable practice, it's a matter of "if" not "when" they'll be caught out. Repercussions go far beyond a fine - the brand reputation can be tarnished with ease.

Instead of treating ethics as something to be obeyed, there are brands out there finding great success from embracing them, and building their brand around good practices. Through linking CSR goals and practices to marketing initiatives, pro-ethics brands are seeing major uplifts in both brand performance and perception. A study with the Harvard Business Review found that 64% of consumers cite shared values as the primary reason for their relationship with a brand. Coupled together with Nielsen's research that 66% of consumers will pay more for a brand that exhibits socially conscious traits, purpose-driven advertising isn't just a "nice to have". It's a "can't afford not to." Ethics is no longer the one hour lecture you skip at the start of the uni course. It's a fundamental driver of business growth.

Despite being a fledgeling company, we've been fortunate to partner and discuss with some amazing brands and projects at the forefront of this newly-established sector.

Knorr is on a mission to tackle hunger in the UK 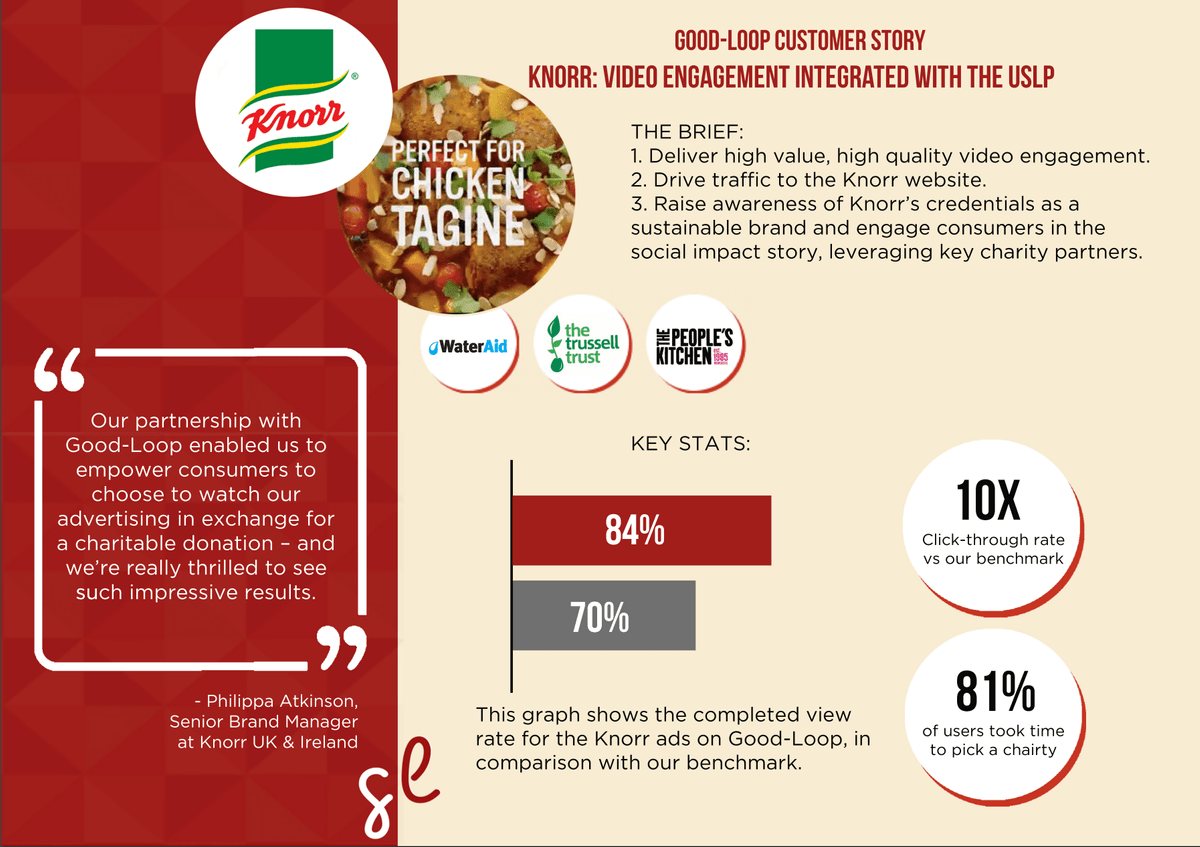 Good-Loop were given the opportunity to collaborate with Knorr through the Unilever Foundry project. This campaign involved serving video adverts, with Good-Loop's usual charitable element - unlocking a free donation to charity after 20 seconds. The results were incredible.

This campaign was picked up by many leading publications, ranging from City AM, to The Drum- reflecting positively on the Knorr brand, and on the wider Unilever group.

Dove is on a mission to challenge fake beauty standards 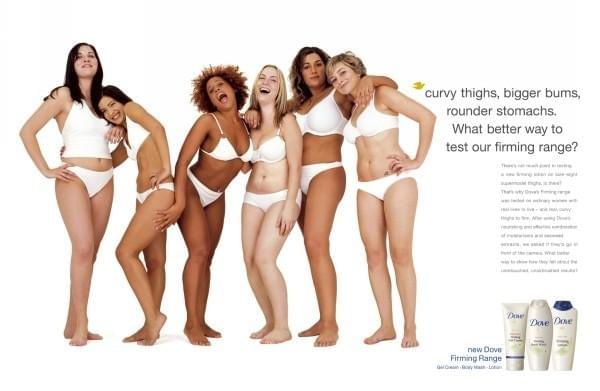 © Dove
It's hard to believe that it's been so long, but Dove's Campaign for Real Beauty has been on the go in various iterations since 2004. In the years that followed there's been 3 Olympic Games, 5 new Doctors, and the rise and fall of MySpace. That's pretty impressive for any product, let alone a single advertising concept.

Capturing widespread public support, and scooping a small mountain worth of thoroughly deserved advertising awards, Dove hasn't just shifted perceptions. They've shifted product. Last year marked another year of brand growth, as sales grew by 6%. And since the campaign launched, the Self-Esteem Project has reached 29 million young people. The data from Dove's side is clear - awareness of the project leads to a higher purchase intent.

Put simply, Dove are an amazing example of a brand that understands that doing right by others, leads others to do right by them. 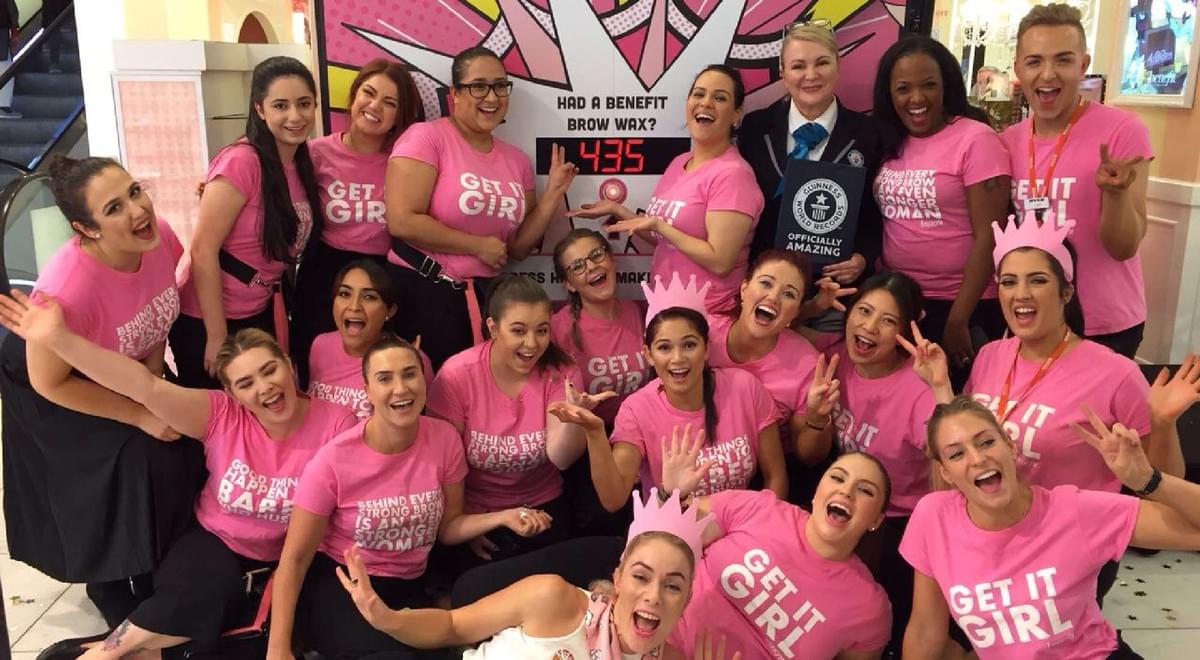 ‍Check out the ad here, and learn more about the campaign here!

It's all too common for tech companies and corporate conglomerates to say they're making the world a better place. But sometimes, it's for real. Profit with Purpose is very much possible.

Perhaps you're thinking about how you can better align your brand purpose to your marketing objectives? If that's the case, we'd love to set up a chat. Even if Good-Loop isn't quite right for you, we like to think we're well connected within this space and would welcome the chance to be able to point you in the right direction.